This article is part of a series called “Twente Leeft!” (Twente Lives!). You can read personal stories here about living and working in Twente. Twente is a nice place to be, according to the talents we meet. The beautiful nature, space, the down-to-earth mentality; they all characterise Twente. There are also plenty of career opportunities! Twente has many innovative, international and future-proof companies that are desperate for staff. Want to know what Twente has to offer? You can find Dominique Clevers' story below.

Twente Lives!
Not a second

Leaving Twente after her studies? She didn't think about that for a second. "I really wanted to graduate in the region. I did that at Demcon. When I was offered a job, I seized the opportunity because I think it's a top company. I love the combination of technology and the medical world and the fact that at Demcon we contribute to the world. In addition, Demcon has a flat organisational structure and there is a lot of room for participation. If you do something that is not part of your actual duties, it is seen and appreciated. This is how I started as an engineer. I noticed that I automatically took over tasks from the project manager if he was too busy and those tasks suited me. And now I am a medical systems project manager myself."

In this position, Dominique has a lot of responsibility. "I deal with customers, the (technical) planning of a project, with the Demcon organisation and finances. I love the fact that my field of work is so broad. I also enjoy contributing to the medical world. For example, we developed a needle placement robot that allows more precise work when ablating (cutting away, ed.) tumours. The fact that people can be helped better when they need surgery because of an innovation I have been involved in feels good."

There are many other projects Dominique leads at Demcon, which she cannot talk about for confidentiality reasons. "Logical because techniques are becoming more and more advanced and our customers often want to prevent another party from running off with their invention." So commercial thinking, but at Demcon, Dominique says the ethical side is also a factor sometimes. "It is important to think about that. 'The engineerable human being', that's a beautiful thing, but you always have to think about how far you want to go in that. I also find this an interesting part of my work that we talk about among ourselves with colleagues." 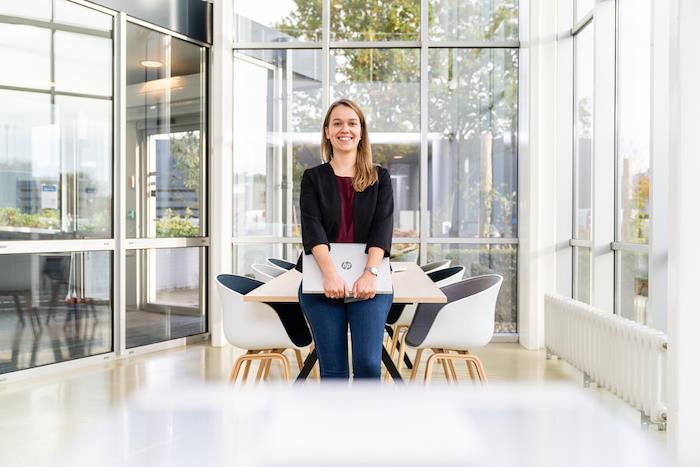 Everyone greets each other

Those colleagues, like Dominique's fellow students at the time, come from all over the Netherlands and beyond. "I am by no means the only non-Tukker here, but everyone feels at home here in Twente. Demcon has branches all over the country so the same work can be done in many places, but the people here are very friendly. If you walk down the street in the Betuwe and say hello, you won't get an answer. Here, everyone greets each other. Besides, you have everything you need here. I now live with my boyfriend Jasper in Borne, a nice village. Shops, public transport, schools, everything is close by. And nature, of course. I like to go mountain biking or walking in Delden or near Haaksbergen. It's all within easy reach.

Involved in everything: from planning to selling homes

Customer and team pleased? Then so is General Manager Sanne

'A warm welcome, both in the neighbourhood and at the hospital'

Davide from Italy settles down in Almelo

‘Working at Innovadis? ‘No fussing, and keep your word’

When technology makes a child happier than candy

Running a nationwide business from Twente

Maikel Wolsink from the Achterhoek feels completely at home in Hengelo

‘We are a sort of matchmaker in the construction industry’

‘I received great opportunities in Twente’

Verry happy with career opportunities and living environment in Twente

Norbert from Twente comes back home

Lotte has seen the entire world but returned to Twente