Solar Team Twente was heading for a historic victory last year. But then a crash crossed the line. "We know we have the talents and develop the techniques for the winning car."

In that last edition, VIRO was one of the main sponsors. The engineering firm was the first to sign a four-year agreement – for two editions of the race – as a RED partner. This autumn, they entered part two of that agreement. "As a RED partner, we contribute both financially and with knowledge and hours," says VIRO project leader Mark Dalhoeven. Mark van Eijk of Solar Team Twente / team marketing and communication also joined: "Because VIRO is a partner for at least two editions, no contract talks were necessary. They could take a few months and then miss the start of the project. VIRO wants to be there from the beginning. For the Solar Team, it is beneficial that it can rely on the knowledge of the partners from the start."

VIRO believes it is important to be on the skin of technology, to contribute to sustainable innovations and to keep in touch with the activities of young, talented engineers. The further development of the RED-E fits in well with VIRO's core activities and ambitions. At the kick-off of 'Partnership edition 2', there was brainstorming about projects in which VIRO could cooperate. "VIRO is a multidisciplinary engineering firm. There are always projects we can support." One is a moving standard to test how the car's solar panels can optimally absorb solar radiation. Another is a setup to test the engines offline. The third project is installing the registration plate: "It must be within 5 centimetres of the rear edge of the car in the coming edition. The shape of such a plate does not fit with the aerodynamics of the car. So we have to come up with a clever concept for that," says Mark Dalhoeven.

An important project for the upcoming edition is the application of a new engine control unit. Mark van Eijk: "The team has been developing since 2016. They constantly test the unit in cars. Last September, for the first time, we used it for 24 hours. That was at the European Championships, in the car of 2017. The results were so good that we're probably going to use it in the next solar car. We're going to use it for many miles to test its reliability. The unit ensures that the car drives more efficiently, starts up faster and gets to its maximum speed faster." 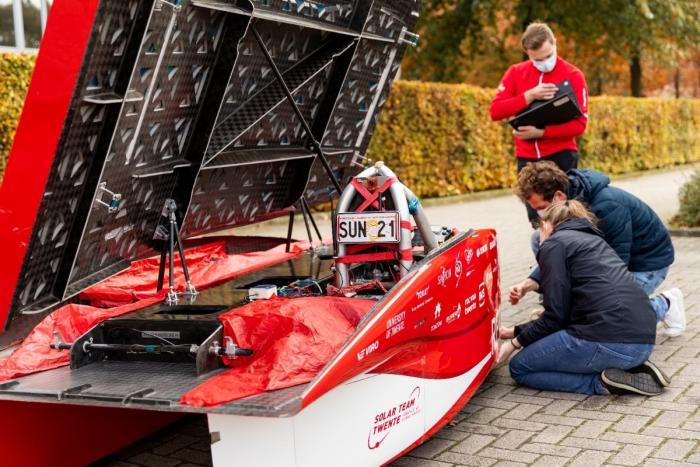 VIRO offers customized solutions for a new piece of world

Because of COVID-19, everything goes different from planned. What do Solar Team Twente and VIRO notice? "Some people work in the office, and others work at home. That goes well. A lot of communication goes through Teams. Recently we had a design review", says Mark Dalhoeven: "You are in a meeting with 60 people. Organising such a meeting is even more challenging in a digital way. You hear and see how driven the students are in there. They know what they're doing. The students learn something from engineers like us, but the reverse is also true. It's brilliant how they work. And it's really nice to be there." The Solar Team is still in the design and preparation phase. The production phase begins in January, Feb. "Then we are in smaller teams spread over multiple locations. We are now thinking about how to approach a design or car presentation. What if it can't be physical, how else? Either way, the schedule doesn't change yet. That car just needs to get there. We are convinced that we built the best car in the previous editions. We are now building further on those: innovate where possible and achieve maximum reach. So, we're going to win in Australia."

Twins from the UT improve education and the business community

Turning a former landfill into a solar park

Common in the future: air conditioning without electricity

Development of electric superbike goes to the edge

Both disappointment and euphoria during the world championships

Aurora 2 is again the most efficient hydrogen car

Renewable energy in the maritime sector

Sound waves to cool your building