They all have their reasons for persevering, sometimes going directly against the general opinion. Take Herman Reinten, for example. He works in road construction, where disposal and then buying new products is the day-to-day reality. “But we cannot continue extracting unbridled material from Mother Earth. We have to use materials effectively by using them for a long time and by reusing the raw materials if something no longer works.” Reinten does not believe in endless meetings and puts his words into action. Sixty per cent of the materials used in the new head office in Borne will come from the dumpsite, and the building meets the highest sustainability requirements. “This means you should take more time and be resourceful. We wanted to use limestone masonry for the façade, just like farms had in the past. These could not be found. So, we are now having a social workplace break used pavement tiles. It’s the same effect, but you do not have to buy any new products. Expensive? Not really. The prices of new products are distorted. They are only this low thanks to price dumping and low wages. The costs of all that transport all over the world and all those modifications are not included.”

Reinten tries working exclusively in his region as much as possible. “I own a road construction company, not a travel agency. What kind of madness is it to let vans drive across the entire country?” To stay focused on his sustainable goals, ReintenInfra appointed Maurice Beijk as “Steward 2050”. Beijk helps the company embrace six of the seventeen Global Goals of the United Nations throughout the entire business process.

Reinten has experienced that returning to the frugality of the past and staying levelheaded is a viable approach. Koops supports this, and says he is regularly “stunned”. “If your tank is empty, you don’t buy a new car, do you? That’s the same with the current insulin pump: when it’s empty after three days, you have to throw the entire pump away. That is such a waste. Why is such a thing not included in the admission requirements for the market? With our product, you can upload software and replace cartridges and infusions. The device can be refurbished, and if it is used up, you can get a new housing made from recycled materials. To me, it is logical to think about these steps, but I keep seeing things that make me dumbfounded: how is that possible!?”

New dairy farmer Grobben has not overlooked thinking either. For the last three years, he and his brother have been growing soy on one hectare near Enschede. Beans are macerated and ground, after which the “milk” is extracted. “That sounds simpler than it is because the production process determines the taste. If it is too “bony”, people do not want it here. There are no negative responses in the rural community, although they probably think about it as some kind of urban antic. However, the brothers do sometimes get annoying responses from hardcore veganists that do not understand why they still have their dairy kettle. “Others warn that there is no future in what we are doing. You must develop some thick skin; you will not sleep well if you don’t. We believe that this combination of animal and vegetable proteins is what the future wants. According to the Nutrition Centre, forty per cent of proteins we consume should be from animals and sixty per cent from vegetables. That is by no means the case yet, but we are at a turning point. Our farm is circular. The residual product from the soy goes to the cows, and the manure is used on the fields. Completely in line with minister Carola Schouten.”

“Make it clear that the knife cuts on both sides.”

Just continue no matter what the people say, is what Reinten advises. Start small, with the elimination of plastic cups and stirrers in your own company and having a bin with a plastic bag underneath every single desk. Have a heating system that does not heat things to 25 degrees. Make it turn off at 18 degrees, even if it freezes. “There will be grumbling at first, but when they go home and talk about it their kids will say: good job, dad! You have to start small, and it will begin to spread. Your environment will become your ambassador.

Carlijn completely agrees with him. “I want to do something for the world. At Create Tomorrow, we help companies that want to take on challenges with the United Nations’ sustainable development goals as their foundation. If we would only develop ideas for profit maximisation with this huge think tank, I would not be very committed. At Create Tomorrow, we can connect students with great ideas to companies that also want to make the world better, and you can move forward together. And there are also small things I can do myself, for example, by no longer eating meat.” The four agree that a sustainable business process must cover the entire chain. Tom: “We thought: we will put our soy milk in glass bottles, that’s the best way. But then find out that it’s only the best way after reusing the bottle five times because melting also costs a lot of energy. Moreover, your product must also be efficiently transportable. There are no simple answers.” Carlijn has noticed this in the supermarket too: “bell peppers wrapped in plastic, I thought that was such nonsense. But I read that if you don’t, they spoil much faster and more will be thrown away. It’s something you just have to know. In that respect, the entire information provision could be a lot better.”

"Taking up a challenge together" 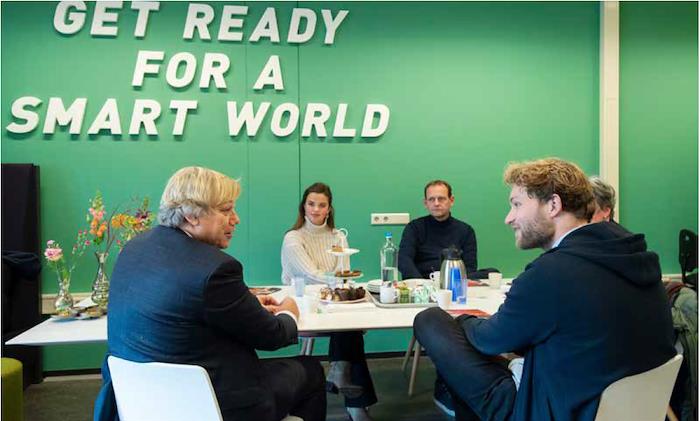 Those who want to achieve something must persevere, all four of them know this. Koops had to fight for a long time before his invention was allowed on the market. “It’s to be expected that there are a lot of regulations for medical equipment, there should be. But it means you must be resolute and dare to continue building on something when you know it might not even reach the patients. If I did not have that spot on the horizon, I would have quit a long time ago.”

It is also important to look for collaboration. “Only when all parties see the benefit, and it turns into a common interest, they will work for it. Health insurances can save 180,000 euros per patient with this discovery, yet they refuse to even pay 20,000 euros for it. Unfortunately, the first response to something new is to immediately hide behind rules, looking at where it could go wrong. If you do this, you will not make any progress. You have to make it clear that the knife cuts on both sides, and then examine the possibilities together. In our case, a better life for diabetics and tremendous savings for insurances.”

Reinten recognises the need for cooperation and a shared vision. “Our goals put the entire building process upside down. The architect drew 5.5-metre-long steel constructions, but we could only find 5-metre-long ones at the dumpsite. It required a different way of thinking, also for the architect. One has to deal with what is available. This flexible approach does not fit in with any kind of legislation or regulation, where everything has to be defined down to the centimetre. I talked with the Borne municipality and immediately told them that if we do this the traditional way, it will never work. You have to share the ambition of making it succeed. This mindset has to be shared by everyone in the process. That is only possible if you keep a clear goal in mind and share that.”

“Nothing will grow if you sit on top of it”

New dairy farmer Grobben found that sharing difficult, in the beginning. “We were also afraid that the competition would run away with our idea. But you have to talk about it, or you will not make any progress. We had already put in a lot of time and energy, but we had not developed a good product yet or sold anything when there was a big article about us in NRC Handelsblad. This resulted in a lot of replies, also from people who liked the idea and wanted to help. You must use your own strength; if you keep your idea with you and go sit on top of it, it will never grow.” Koops has experienced the same: ever since he became a National Icon, he has received support from the government and access to all sorts of advisers. “Those who cannot share cannot multiply. I am not afraid of competitors. Those who start now will be 15 years behind in the development process”, he reassures the young “dairy farmer”.

Carlijn emphasises the need for an open attitude. “Companies that turn to Create Tomorrow have a challenge they cannot solve themselves. You could keep trying yourself, but you can also present your challenge to students who look at it in a completely different way and with an open mind. But you do need courage to turn to us. It would be very nice if even more companies would register with Create Tomorrow.”

"Work hard, and you will go a long way"

What do these “minds of tomorrow” need to really make the world a better place? Money, Grobben calls out, and the rest has to laugh. Very relatable. But the new dairy farmer knows that financing is only one aspect of success. “We are now receiving subsidies from the province of Overijssel, for example, so that is going quite well. Perhaps it is even more important to find great partners who can support and strengthen you.” Inventor Koops fully agrees. “If you don’t have the money, it forces you to be creative. Of course, you need money to continue developing, but we have not yet spent ten per cent of what a pharmaceutical company would spend in such a process. The most important thing is to show people what the benefits are, and then work together for that common goal.”

Carlijn also believes that collaboration is the key to success. “It can be very powerful if you take up a challenge together, each from your perspective. I notice that a lot of companies are already very conscious of the Global Goals, and that is encouraging. However, it could be a lot better. That is why we also want international students to join in, to have an even bigger effect. And we work together with Novel-T, so that the ideas we come up with during those two days will not be set aside but are actually developed further.” Reinten would be happy if other companies in his sector were to follow his sustainable approach. “It’s not about the leader, but about the followers. You must be willing to go for it. It costs us a lot of money but, as a grandfather, I feel responsible for my kids and grandkids in the long term. When Tony Chocolonely started with his slave-free chocolate, half the world yelled at him that it would not be possible. But it worked, and it worked well: it became a huge success. You have to include the market in your thought process, and you can only do that by setting an example even if it goes against everything. I use Pippi Longstocking’s statement: I have never tried that before, so I think I should definitely be able to do that. My experience is that if you work hard, you will go a long way.”